A Conversation with Richard NonasTelling It Slant by Joyce BECKENSTEIN 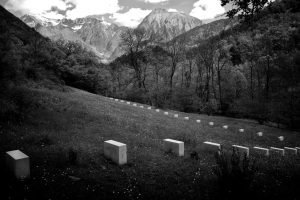 Richard Nonas’s studio, a Wunderkammer piled high with artifacts and relics, as well as past and in-progress works, unfolds with the unexpected surprises of an archaeological dig. Hunkered down within a jungle of antique vises and drills, ladders, chains, axes, arbitrarily stacked books, pulleys, rugs, handmade kayaks, and countless constructions of wood and steel are collections of exotic masks and curiosities. The contrast between the studio and Nonas’s sparse but no less complex interventions in gallery spaces is nothing short of astonishing. Within the mysterious din of his studio, Nonas shares some intriguing insights into his unique response to space as a sense of place, discussing the stark white light of his recent exhibition, “SLANT” (Fergus McCaffrey Gallery in Chelsea, New York), which featured a single two-floor installation composed of wood and steel sculptures and one large drawing, all dating from 1973 to 2017.

Joyce Beckenstein: In John Seabrook’s New Yorker story (January 23, 2017) about his father, a wine connoisseur with a formidable wine
collection, he recounts an elementary school assignment to draw a floor plan of his house. His mother was mortified to see that he had made a small family bar disproportionately large. Clearly, this room occupied an important place in his mind. The episode makes me think of your early experiences as an anthropologist and your discussions of how indigenous people acquired a “sense of a place.” How did this awareness influence you as an artist?
Richard Nonas: I came to art from anthropology and literature, with very little interest in visual art. Before that, the Brooklyn I experienced growing up was an entity, a city of its own, but cut by, shaped by, held by overlapping though quite separate ethnic enclaves—Jews, Italians, Irish. The borders between these groups were very complicated. Each of us felt very similar geographical and emotional edges, but we felt and placed them differently. That interested me long before art did. In college, I wrote a thesis on Faulkner’s work as a mythology of place. Later, having

spent time in the South, I realized that
what I had understood as mythology
was the powerful realism of a specific place. That disjunction was what moved me.
JB: You were interested in what was happening in that strange place between two worlds?
RN: Yes, in the strange doubleness of those differences. As an anthropologist, I realized that place was the hinge.
JB: How do you define place?
RN: Place is physical, geographical space imbued with human
meaning, a bounded area imbued with social being. It is the complex
interaction between the natural and the human world, the constantly shifting balance between them. People in the Canadian forest, Indians in the Mexican desert, kids in Brooklyn all find their own meaning in that edgy doubleness.
JB: Can you be more specific about how that works?
RN: In 2011, I did a work (an intervention) in an isolated, abandoned
village in the French Alps, a tiny hamlet with a 12thcentury
stone church, two hours’ walk from the nearest road—a hidden place

surrounded by forest, where people had lived for a thousand years, a place where no one lives now, whose last
inhabitant walked out in 1939 carrying the tin roof of his house on his back. A place remembered, almost revered, in those mountains for a history of hard, harsh, continuous struggle with the
encompassing doubleness of place—the good and the bad of it, the beauty and the pain. And the ordinariness of it, too, the familiarity. The absolute beauty and unavoidably personal reality of it: its power, I mean, of specific and undeniable place.
JB: What did you create there?
RN: I tried to mark that place and that power, that enduring personal place of old shared habitation. I tried to mark what that old doubleness, that knot of nature and culture, had come to mean, what it felt like now. To mark the doors between that place and the encroaching forest, the fissures, the connectors, and the gaps. The church itself, the school, the mill. Two valleys away, I found a quarry and cut blocks of the same stone that was used to build the 900-year-old church. I brought those blocks to the site by helicopter and lined them up as markers along the pathways.
JB: Following the markers in your work is like journeying through time—and that is no less true of your studio, which has its own undeniable sense of place. Can you point out some of the “charged” forms that you often mention as key to your work?
RN: The charged objects are almost-public, private things, like the Yaqui Indian mask, which is filled with presence. And that Bolli on the table, a ritual object from West Africa. And the kayaks—full-size and accurate replicas of specific Greenland Inuit boats that I made and use on the Hudson. And some of the sculptures. But it is never
the object itself that is important to me. The objects that hold me confuse me by oscillating between what they

are and what they can actually accomplish.
JB: That reminds me of the story you tell about playing with your dog years
ago, pitching sticks for him to retrieve, then putting two sticks together and having an epiphany about the nature of sculpture.
RN: At the time, that story had nothing to do with sculpture. I was not thinking about art. I was thinking about communication and the limitations of language. Those sticks somehow conveyed specific emotion, did it directly and immediately. And that
amazed me. I realized that objects could communicate emotion directly without a story or narrative.
JB: As I look at your object-laden walls, I’m particularly drawn to three small, wooden constructions. Numerous similar forms surround them, yet these wooden blocks intrigue me more than anything.
RN: But if I moved them to some other location and surrounded them with other pieces, your response might change—that is what interests me most.
JB: Is that why you regard the pieces you make as tools—objects to be re-purposed in a variety of contexts, each resulting place generating different emotional responses?
RN: Yes, objects can create a place. And that place, I believe, is what moves me.
JB: An emotive place?
RN: All places are emotive, and all are different, yet not all places move me.
JB: But your places emit energy, just like Vière, the abandoned French village. When viewers go into that place, they absorb it or they don’t, depending on who they are and what they relate to.
RN: Yes, depending on what they bring. And what they see. Beckett
speaks of “A Place. Where none,” which means, I think, not a virtual place, but an actual one barely touched by human meaning.

JB: That reminds me of Gaston Bachelard’s notions of immensity. He wrote, “We do not have to be long in the woods to experience the…anxious impression of going deeper and deeper into a limitless world. Soon if we do not know where we are going, we no longer know where we are.” Your exhibition “SLANT” particularly resonates with that.
RN: I don’t like that notion of a limitless world. I think that kind of poetic vagueness is an easy way out of the problem of complexity and the fear of ambiguity itself. Poeticizing the sense of unknowing is not as interesting to me as concretizing its power. I have no interest in situations without tension.
JB: Then you want your work to keep the vulnerability, not appease anxiety?

RN: Sure. That’s the function of art. Not poeticizing, but poetry.
JB: You can have anxious poetry, can’t you?
RN: Yes, hardly any other kind. But I don’t want answers from art. I want more questions. What interests me is uncertainty—
Marianne Moore’s description of her poetry as real snakes in imaginary gardens.
JB: Tell me about the first floor of “SLANT”— the birch timbers stacked in pairs across the
floor and the steel sculptures on the wall. Why is the timber piece called Riven?
RN: “Riven” is an interesting word. To rive is to cut violently. We are living now in violently cut times. Doubleness again. I wanted to fill this space with a continuously
cut body skewed from the thrust of
the room and weighed down, held down, by a horizon of steel wall works.
JB: You’ve used birch timbers before. How do they create different senses of place?

RN: Each place, each possible intervention, is a different challenge, a different problem,
a different place to find and build
from. Each work changes as I focus on it. Every change changes everything else. Each place, each gallery space, changes everything
else. The edgy connotations of birch trees when I used them in 1991 for an exhibition in Warsaw, Poland, were different than they are in New York. The job to be done changes everything.
JB: Did you title the show “SLANT” because the grid is set at an angle to the walls?
RN: No. I like the 19th-century feel of the word. I like that Emily Dickinson famously described her project as “tell all the truth, but tell it slant.” I like the word “riven,” too.
For me, it is a telling of it slant, a pushing of old against new and steel against wood.
JB: How does this relate to the works upstairs?
RN: One moves about in a place, moves in and through it. And a place shifts with your viewpoint, builds and re-builds itself,
and finally surrounds you. I needed the second floor to slant and rive the ground floor. I needed the view up and the view down. I needed you to see everything twice. The drawing set between the two floors, hung neither up nor down, is the hinge between going and coming.

JB: Going through this show reminded me of your description of Vière village.
RN: A strong place pulls you in, then ultimately spits you out. That’s the doubleness, the tension.
JB: Though the lower level was crowded, the upstairs portion was quite open and sparse, with two pieces—Southern Champ (for Robert Prado) (1973) and Rasp (2017)—connected by the large black drawing on the wall. How are the two floors related for you?
RN: Maybe upstairs is the slant, and downstairs the rive, though I never thought of it that way. I hadn’t seen the big wood piece, Southern Champ, for many years—it was buried in my studio basement. But its pushing-up-and-pushing-down presence anchored
the show. The asymmetry, spatial and temporal, of both floors was important to me, but it was an asymmetry that sat very uncomfortably close to symmetry. Everything was slightly off-center. A line—like Rasp—seldom points to a central place. A diagonal is never a true diagonal. Lines don’t stop; they continue in both directions.
JB: Do you want your work to reflect how we experience life? Even your titles tend toward the edge of life and art.
RN: What a question—art, life, experiences, with titles, too. I make up titles all the time, but I don’t give in to most of them. Language itself is the secret-sharer of my visual art, its most intimate enemy. Titles are my last-ditch substitute seductions, the final subversions of art toward life.

Joyce Beckenstein is a writer based in New York.