Described as a storyteller, Anna Conway (b. 1973) creates paintings that depict narratives in which, in her own words, “ordinary people are suddenly confronted by forces greater than themselves.” Conwayʼs approach to representation is precise and methodical, inventive and deliberate.

The artist first came to prominence in the 2005 group exhibition, Greater New York, at MoMA PS1, where her meticulously rendered paintings announced the arrival of a singular talent. Her stylistic development has emerged from spectacular and unpredicted encounters with natural forces beyond normal human experience to a more anthropological and psychological exploration of the human condition. Conway’s paintings are a testament to the continued relevance and fascination of the centuries-old tradition of realist painting—an archaic practice, which seems to grow only stronger with every passing year.

Conway received her BFA from the Cooper Union for the Advancement of Science and Art and her MFA from Columbia University School of the Arts. She has exhibited extensively in the United States and Europe and is the recipient of numerous accolades, including: the John Simon Guggenheim

Please scroll down to see the full details. 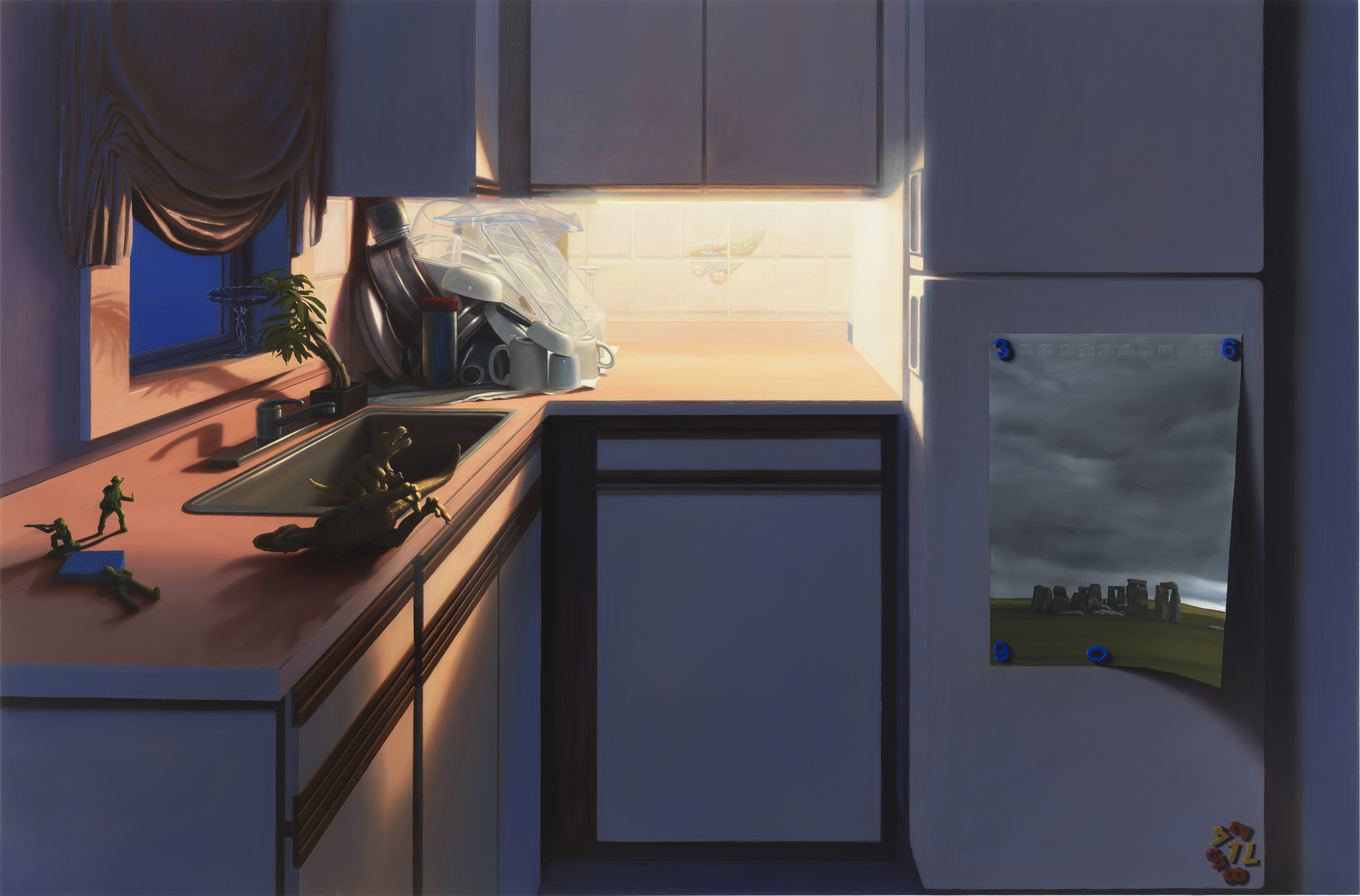 Two toy soldiers fight valiantly on for a cause lost or even unknown to them, their wounded compatriot writhing in pain on a blue sponge.

Nearby, a plastic dinosaur roars, asserting dominance over another, who has been toppled and vanquished.

Fishing for minnows on the back of a whale (2021) combines an incongruous assemblage of the present and the past.

A six-story structure of washed dishes teeters on the brink of collapse, suggesting an admirable effort at domesticity, albeit lacking in follow through.

the human and the prehistoric playfully compressing the history of everything into a modest kitchen.

A Stonehenge calendar hangs from the nearby fridge on numeral magnets, numbering our days from the beginning of time.

And here are our struggles: feasting on mythology when there’s food in the fridge; Fishing for Minnows on the Back of a Whale, as the painting’s title would have it.

Conway has us blink a few times, then look again—unable to fully settle into a sense of reality nor absurdity—at the simultaneously tiny and expansive worlds that we inhabit. 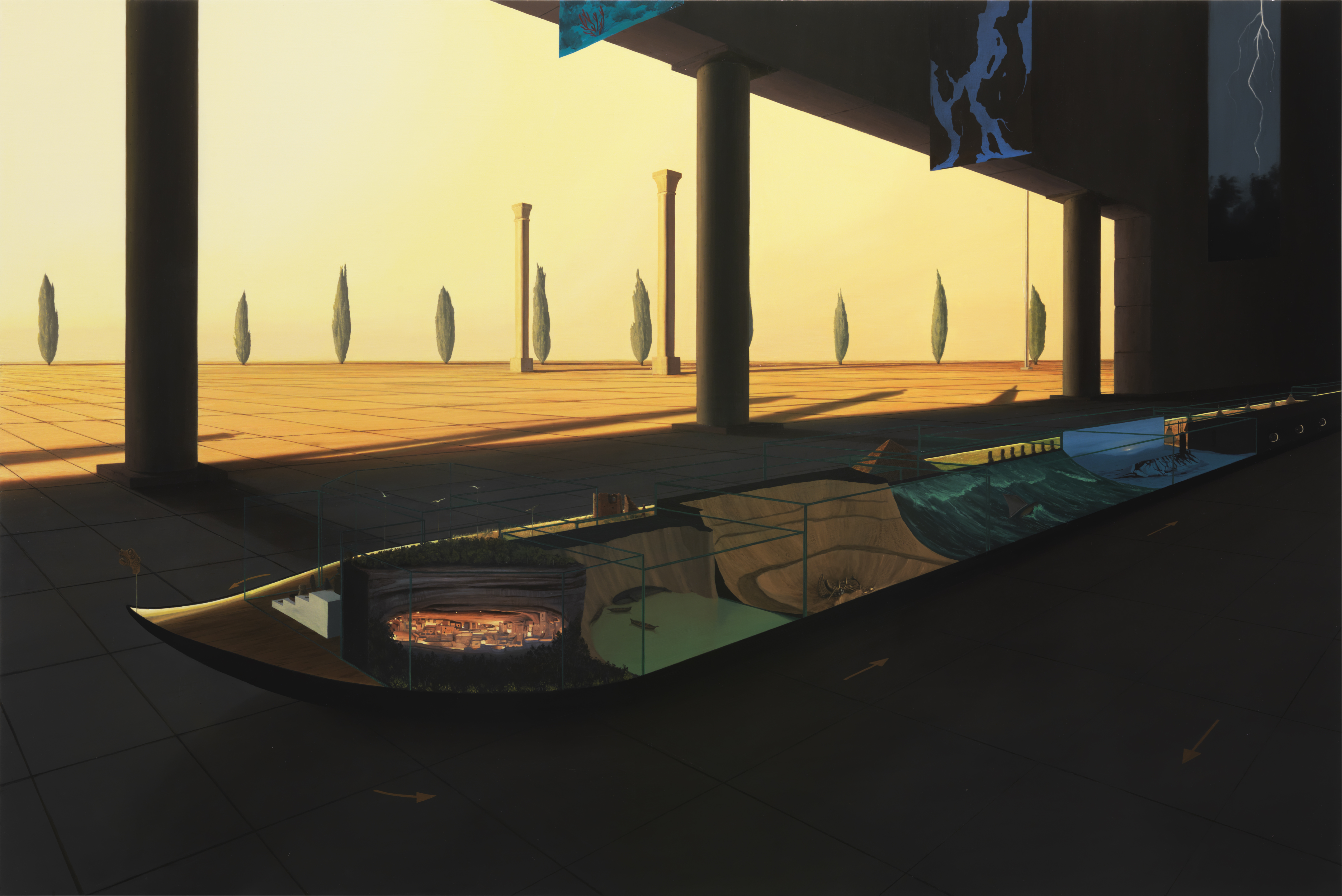 A cave dwelling…
The ruins of monuments…
A survivor-less whale hunt…
A submarine surfacing through ice in some polar dawn…
This is Anna Conway’s most recent painting: Ark (2021).

In the painting, we come upon this feat of ethnographic exhibition designs.
These scenes—set into vitrines in the shape of a large boat—curiously include miniature dioramas of several of Conway’s previous paintings.

Created during the pandemic, the glass cases in the painting seem to reference the confinement and stagnancy of quarantine, creating a strange timeline of moments perpetually just past.

As a child, Conway’s dream was to run an animal shelter, which she imagined might look something like Noah’s Ark.

As in the denouement of the Biblical tale, the Ark in her painting appears to be arriving into a place of rest, settled ashore even as dynamic arrows surrounding the vessel suggest movement.

The ark’s location is in a limitless metaphysical plaza, composed of cypress trees and columns on a Cartesian perspective grid.

Its precise and calculated location raises the possibility that this setting might be a museum of the gods, or a future digital storehouse for the whole quaint history of our obscure human race.