The acclaimed Japanese artist, whose career-long engagement with universal themes of conflict, nationalism, genesis, and transformation, inspired and emboldened an entire generation of Japanese artists, passed away last month at the age of ninety-two.

Born in Saga Prefecture, Japan, in 1928, the course of Ikeda’s early life was dramatically altered by the ongoing intensity of World War II, culminating in his service as a kamikaze pilot at the age of fifteen. Spared by the ending of World War II, in 1948, Ikeda moved to Tokyo and attended Tama Art University where he became engaged in Taro Okamoto and Kiyoteru Hanada’s Avant-garde Art Study Group. 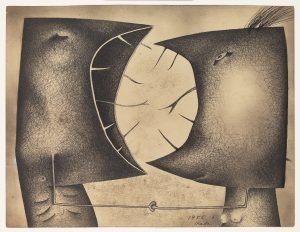 Pursuing a strong anti-war position, the artist created expressive realist drawings that fused reportage and satire. His early work depicted the heartlessness of society in the age of automation and questioned the role of

individual responsibility and free will after feeling betrayed by his government, and the political and cultural machinery of interpersonal and international conflict. Ikeda organized the artists and writers group, NON, and his reportage-style drawings from this period exposed domestic and international political corruption, eventually developing into monstrous portraits and grotesque creatures that reveal the dark side of human nature. 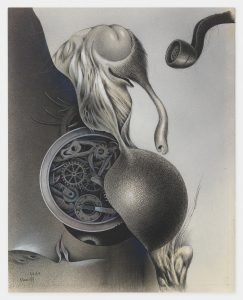 In the 1960s, the artist produced several series of works inspired by a wide range of motifs, such as masks (Hundred Masks), toys (Toy World), and anatomical images (Dissection Archaeology). During the following decade, harboring a profound fascination with space and time, he carried out conceptual long-term performances, Asama – Ararat Olive’s Ring Plan and

Brahma Tower, in which he tried to experience an unimaginable perpetual time. In his series, Brahman, which he began in 1973, the artist found release from social causes to embrace a state of eternal truth and bliss occupied by genderless embryonic forms in infinite space. Narrating his own story of genesis, the artist turned his attention inward, exploring the metaphysical bonds that underlie and unify the universe—defining his paintings as a “wormhole connecting the inner and outer worlds.”